Are Wholesale Distributors Ready to “Harmonize” their DSCSA Serialization Requirements?

The Drug Supply Chain Security Act (DSCSA) is prompting a lot of questions, such as “Will wholesale distributors come together on serialization standards for manufacturers and suppliers? And, if so, when?”. It’s also created a lot of unknowns. But these questions where among the most common ahead of last week’s HDMA Distribution Management Conference (DMC) in San Antonio. More than 500 leaders in the pharmaceutical supply chain industry attended, and LSPediA was there to listen and contribute to some really important discussions.

High on everyone’s “must see” list was the March 7 conference agenda, which featured presentations from several Wholesale Distributors (WD), including Cardinal, AmerisourceBergen, McKesson, and NC Mutual. Would they follow McKesson and recommend GS1 EPCIS format, or go off in their own direction? While most manufacturers and suppliers would prefer the former, any new information would be welcomed.

After attending HDMA’s Traceability Seminar last year, I wrote a blog post entitled, “Wholesale Distributor Requirement for DSCSA 2017 May Be Patch Work.” I argued that WDs were all over the map regarding the 2017 DSCSA, and that the lack of uniformity would have a major negative impact on manufacturers and suppliers, especially with regard to electronic aggregation data. Then in January came some clarifying news: McKesson would be requiring aggregation and that the aggregation data be submitted in EPCIS format. I discussed the move and its implications for the industry in our February 2016 blog post, “Wholesale Distributors Deliver Clarity Around Serialization and Aggregation Requirements.”

Then, during last week’s DMC, we received more news from WDs, as well as some updates about lingering challenges:

Cardinal took it a step further: By the end of March they will lay out specifications for labeling, verification, grandfathering, and data exchange requirements. When I asked if this specification would be harmonized with specs from other WDs, Cardinal replied that their requirement will aligned to GS1. Other WDs at the conference confirmed the same thing. This is great news for your manufacturing and supplier businesses because, as you move toward serialization, you’ll be able to do business the same way with Cardinal, McKesson, and all other WDs.

Now we know: WDs want aggregation and aggregation data. But is your business ready to respond? LSPediA is a leader in Drug Supply Chain Security Act (DSCSA) and serialization implementation, and we can help your business: 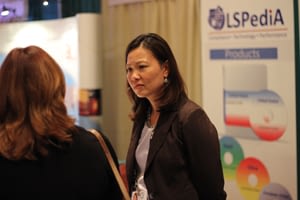 To find out how we can give your company compliance peace of mind and a competitive edge, contact me today. Working together, we’ll develop a customized LSPediA Services plan that’s just right for your business.